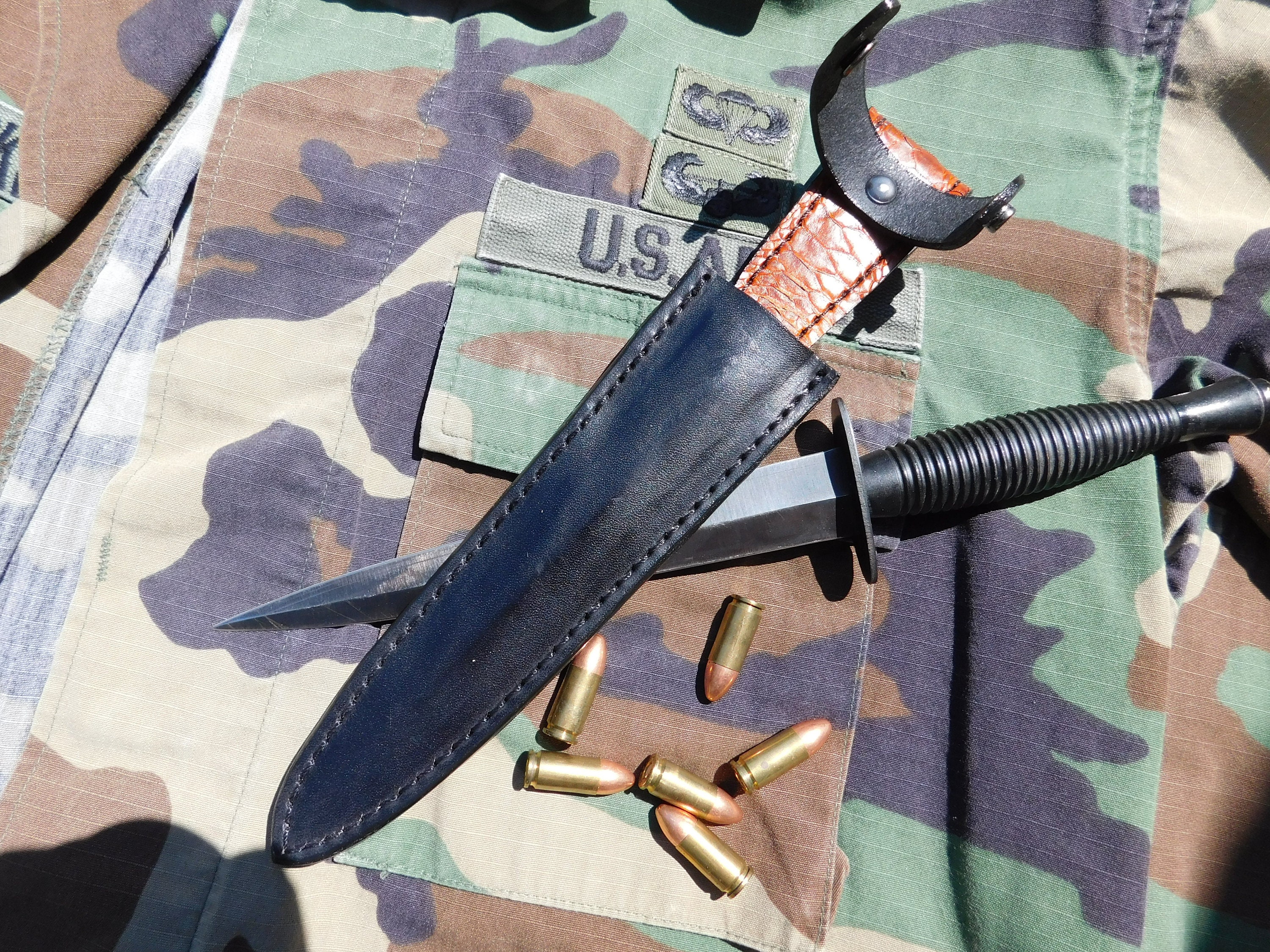 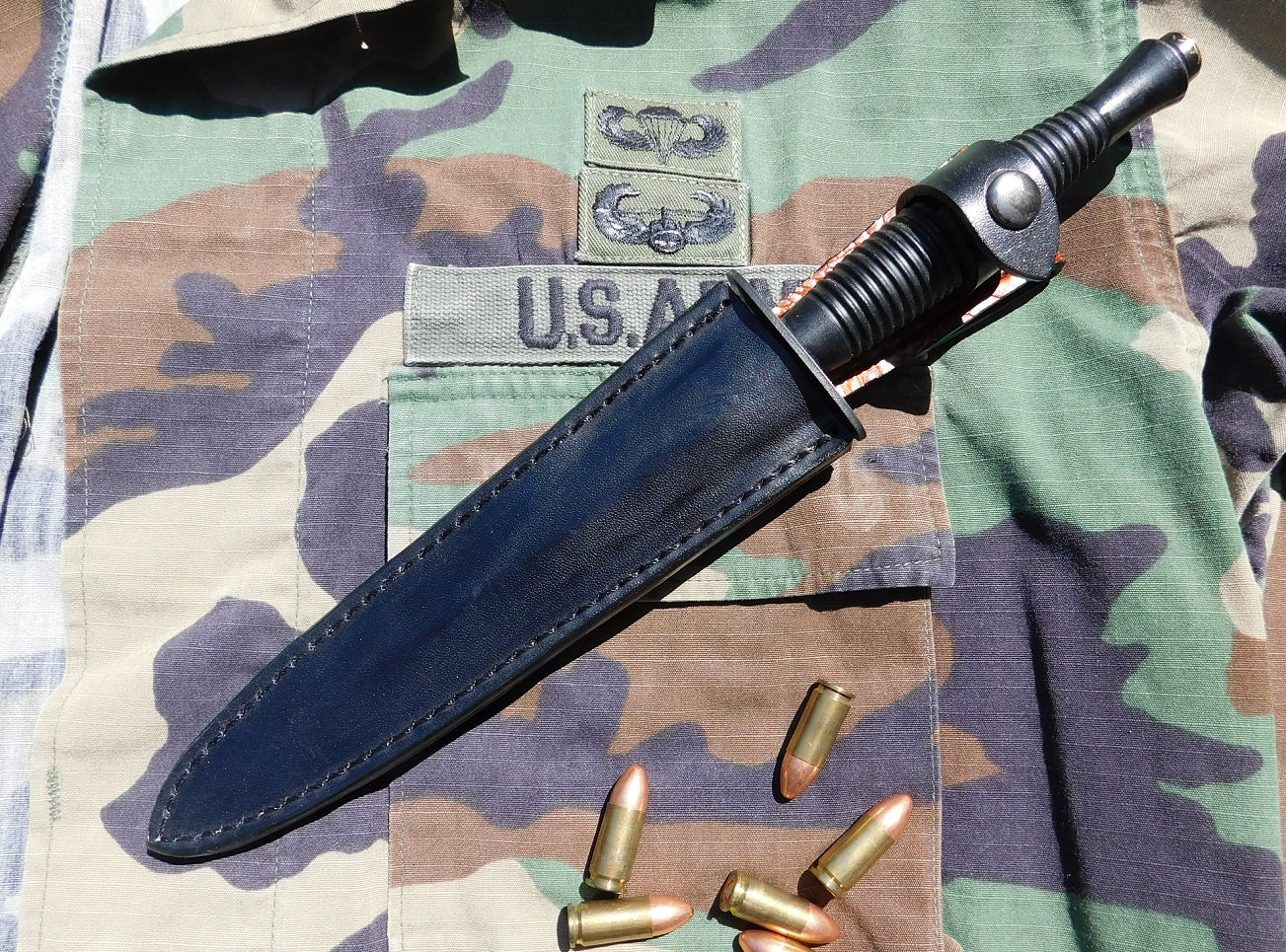 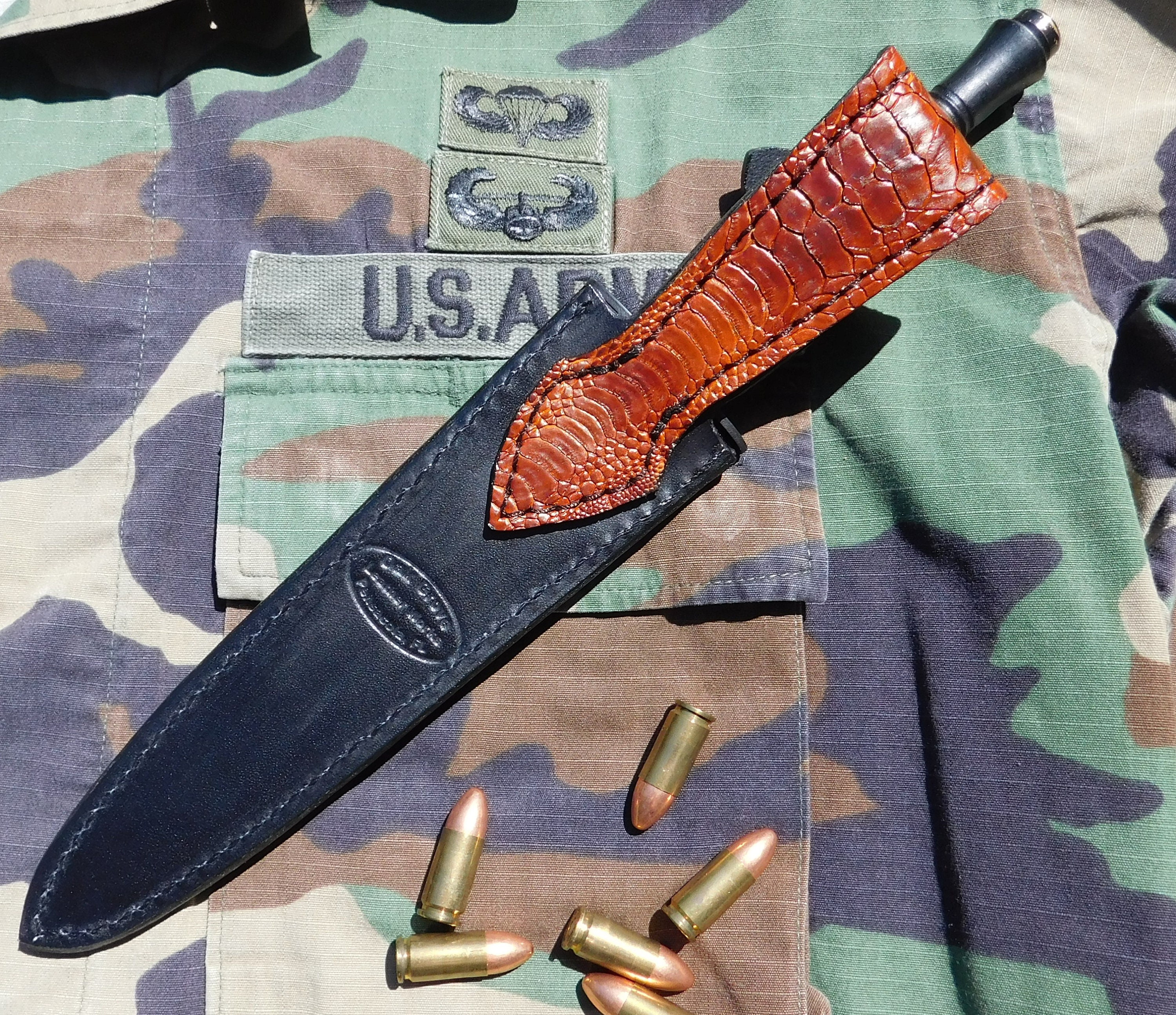 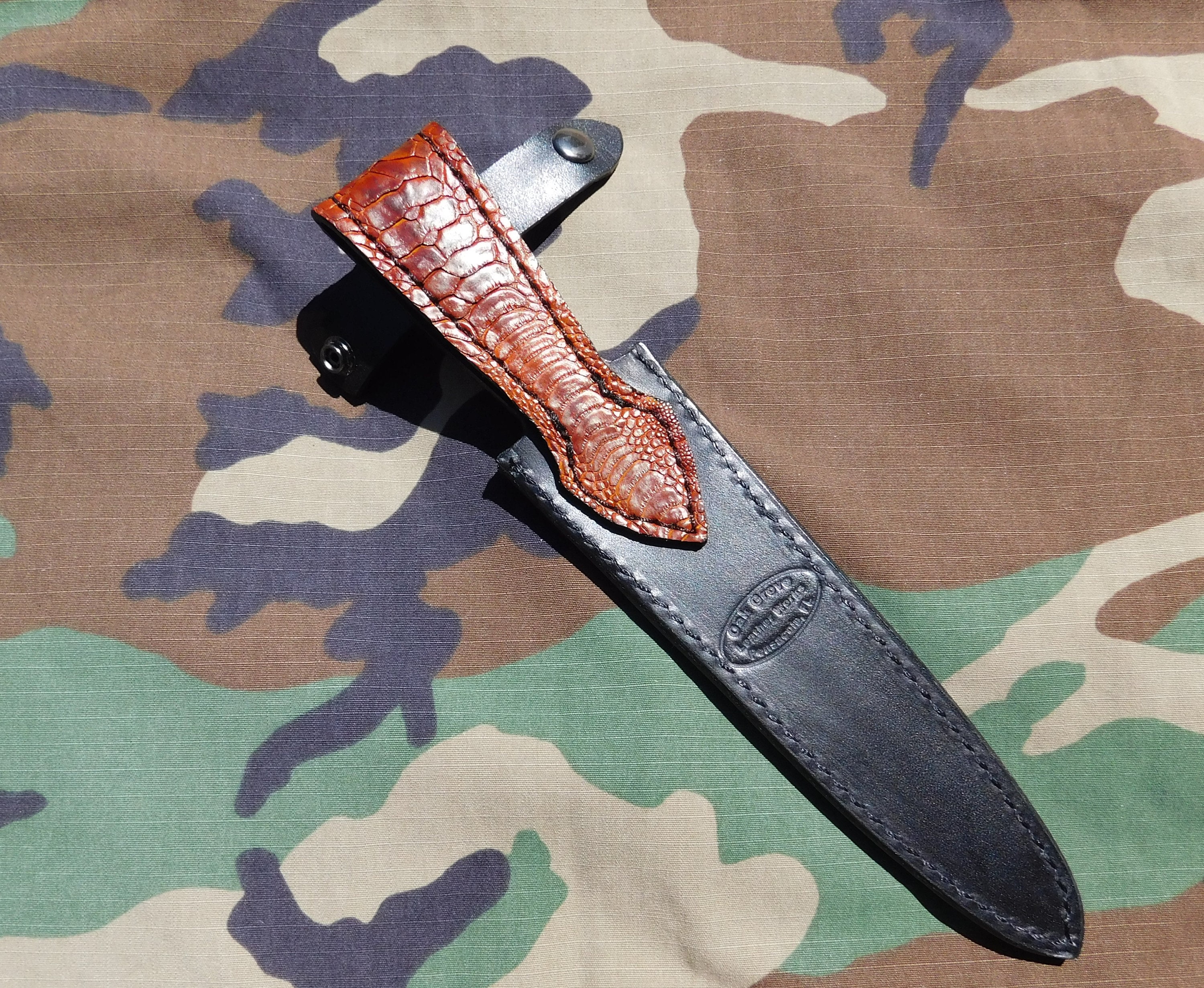 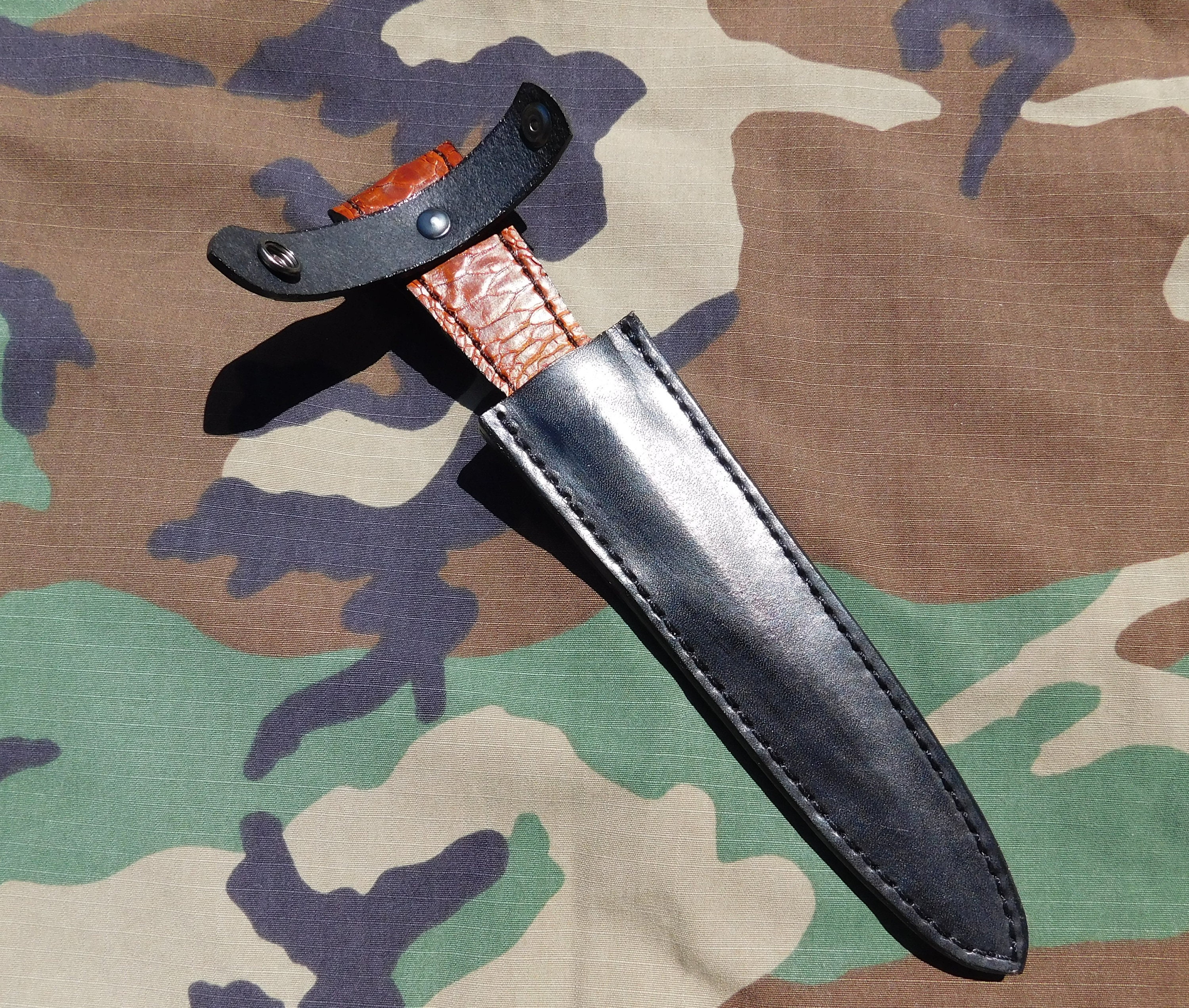 Offering a custom made sheath for the legendary Fairbairn-Sykes fighting knife. The posting is for just the sheath. The knife shown is from my personal collection and is not for sale.

I love everything about the F-S fighting knife, except for the sheath. The original was quite flimsy (except for the OSS model), didn't secure the knife particularly well, and had to actually be sewn to the uniform to hold still properly. The one I made is more along the lines of a hunting knife sheath and is very sturdy. It also hangs well from a standard belt and the knife is secured with a leather strap and snap, rather than the piece of elastic used on the original. For bit of flair, I covered the hanging loop with turkey shin, which I dyed brown and finished with a gloss finish. As you can see, it is very sharp looking. This sheath, would allow you to carry your F-S knife without worrying about losing it, or damaging the valuable original sheath.

If you have a Fairbairn-Sykes knife and would like a daily-use sheath that is more similar to the style of the original, but sturdier, check my other listings. Also, if you are a knife enthusiast and would to offer advice on style and function of knife sheaths, fire away! I'd be happy to hear from you.

(Nerd note: The knife shown is a Type 3 F-S fighting knife which I believe is from the 1980s The knife was first produced (Type 1) in 1940 by Wilkinson Sword, and remains in production today by a variety of makers, including counterfeiters. Mine does not have a maker's name on it, but is stamped "Sheffield, England". )

Items are sent via US Postal Service via First Class mail. Items that may be shipped flat (cuffs, barrettes, etc) go in a padded envelope. Other items mail in a box. Shipping is done Monday through Saturday, before noon, so Sunday orders go out Monday.

Returns accepted only after appropriate communication. (Let me know what's wrong and give me a chance to fix it for you.) No returns after 15 days or if item has been used or altered. Refunds will not include shipping costs. Sales of custom made items are final.

I make all of my items one at a time, so custom work is always an option. Drop me a line and we will discuss what you need.

0 items in your cart