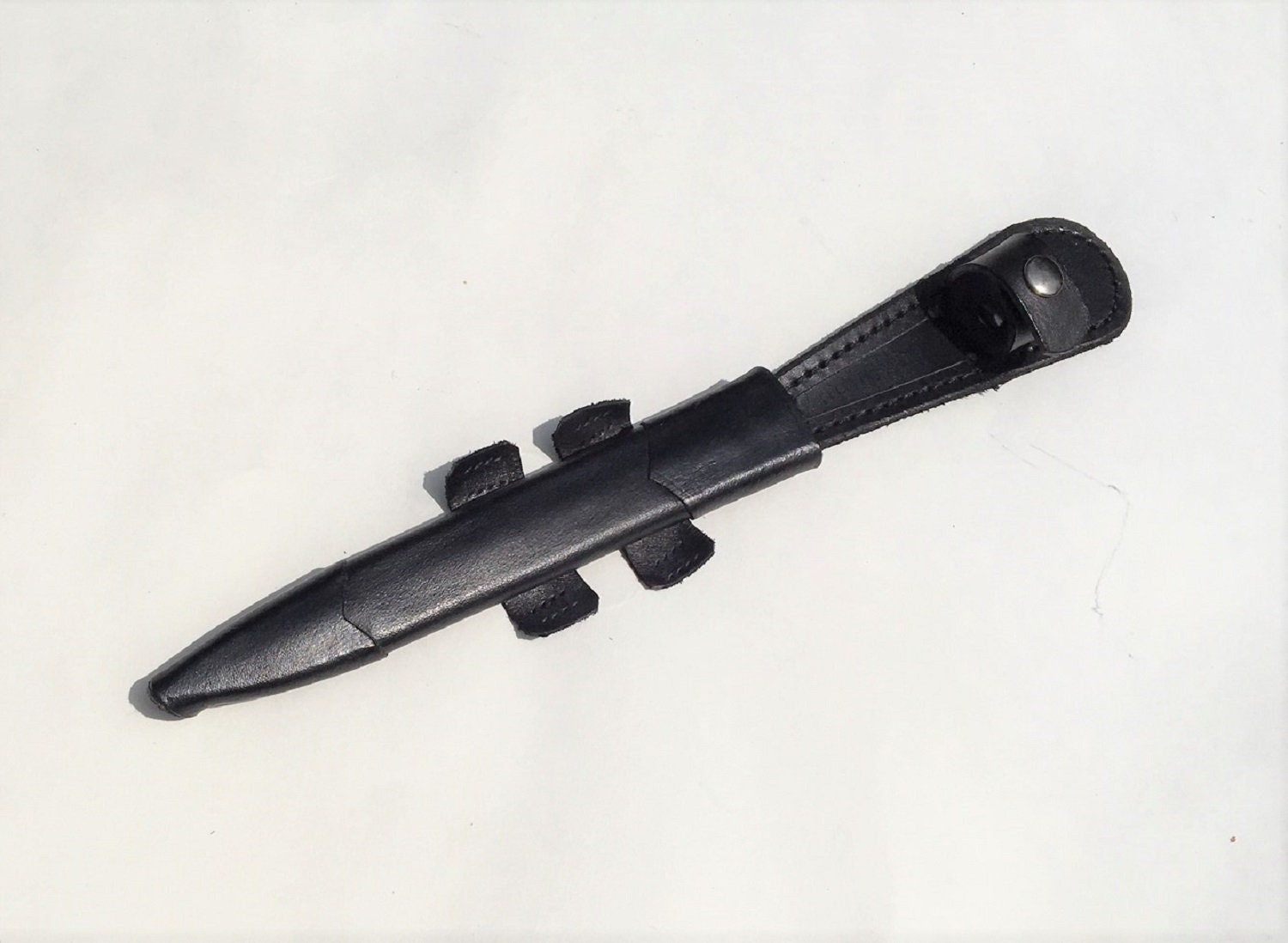 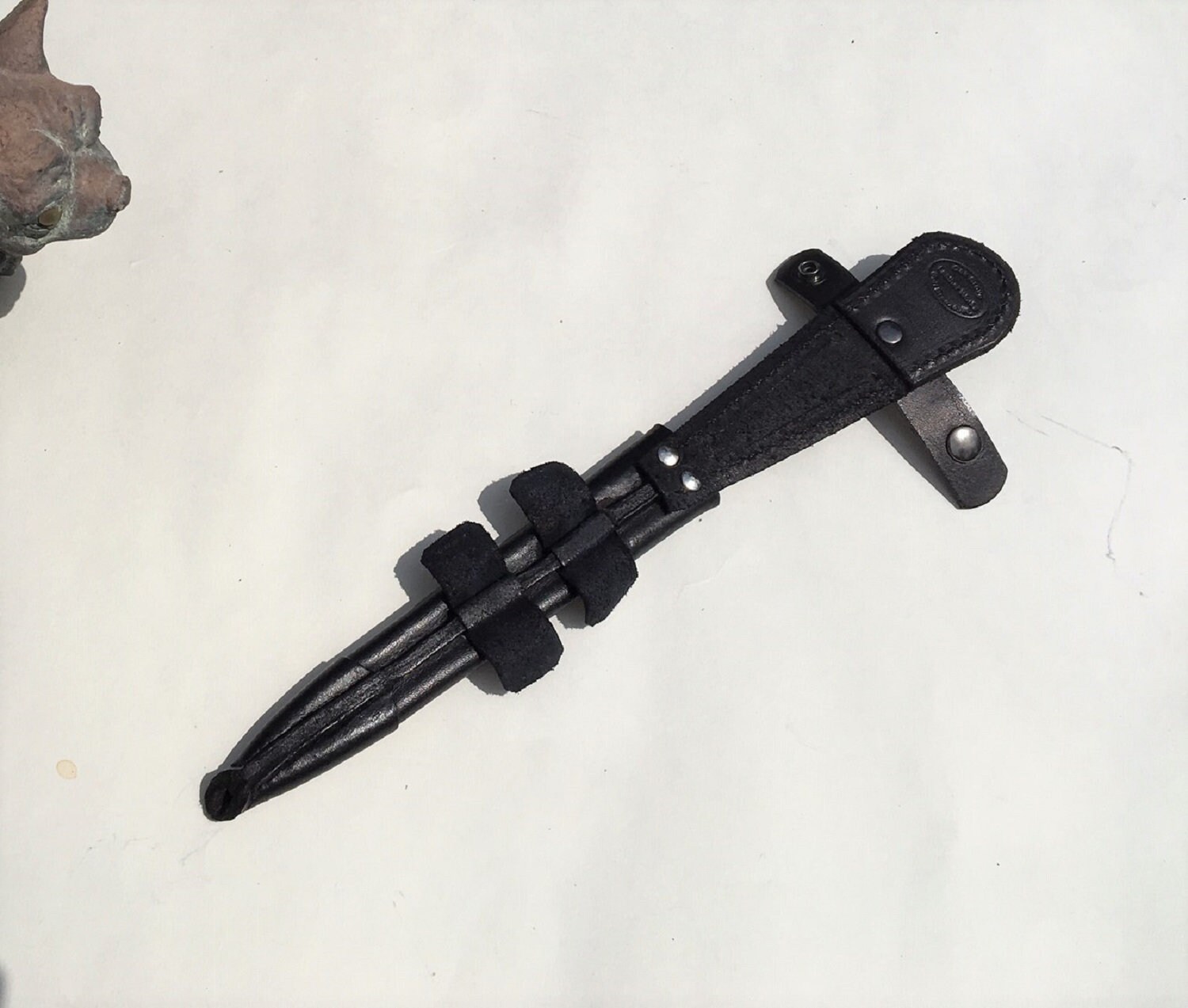 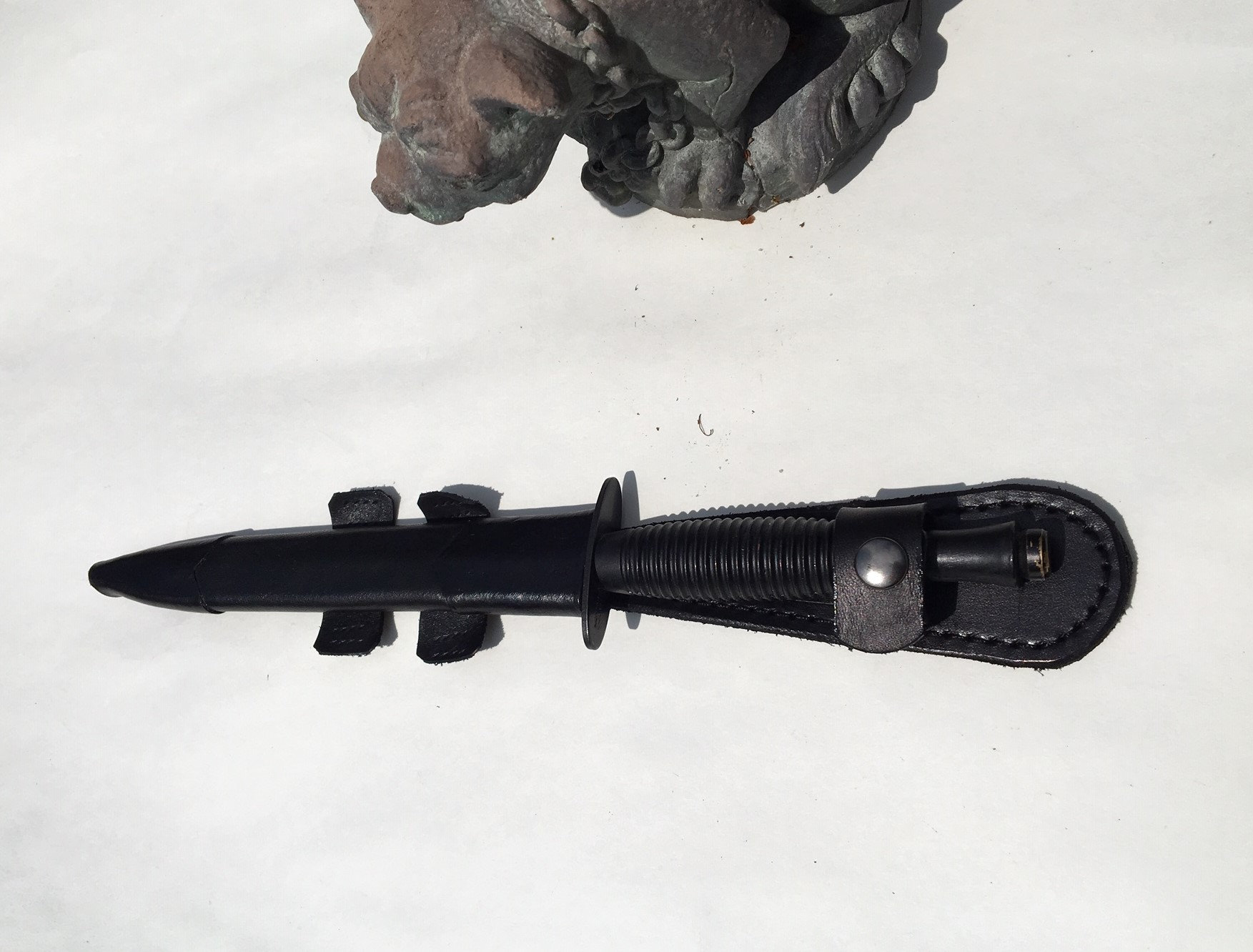 Offering a custom made "daily-carry"sheath for the legendary Fairbairn-Sykes fighting knife. The posting is for just the sheath. The knife shown is from my personal collection and is not for sale.

If you have a Fairbairn-Sykes knife and would like a daily-use sheath that is very similar to the style of the original, but sturdier, here it is. When you buy a vintage knife, it is great to be able to have the original sheath, since they often experience much more wear and tear than the knife itself, and seldom survive in the best condition. If you would like to carry your knife in a new, undamaged (and let's face it, less valuable) sheath, you understand why I made this one.

The construction method on mine is the same as the original sheath. I used a little heavier leather than the original did. The leather is cut to size, hand-stitched down the back seam, catching in the sewing tabs; then wet and formed to lie flat. I used a leather tip instead of the original metal "chape", and added an extra layer of leather for a collar at the top. It makes the sheath sturdy, without detracting from the style. I also replaced the original, very flimsy, elastic band with a leather securing strap and snap. Some early sheath styles did have a leather strap and snap, but most were the elastic, which seldom survives. The hanging "frog" is riveted to the sheath, the way the original was. All in all, I think it is a very good study on the original. I won't call it a copy or reproduction, since I was trying to do some things better, and for different reasons than the original war-time production runs.

(Nerd note: The knife shown is a Type 3 F-S fighting knife which I believe is from the 1980s The knife was first produced (Type 1) in 1940 by Wilkinson Sword, and remains in production today by a variety of makers, including counterfeiters. Mine does not have a maker's name on it, but is stamped "Sheffield, England". )

If you are a knife enthusiast and would to offer advice on style and function of knife sheaths, fire away! I'd be happy to hear from you.

Items are sent via US Postal Service via First Class mail. Items that may be shipped flat (cuffs, barrettes, etc) go in a padded envelope. Other items mail in a box. Shipping is done Monday through Saturday, before noon, so Sunday orders go out Monday.

Returns accepted only after appropriate communication. (Let me know what's wrong and give me a chance to fix it for you.) No returns after 15 days or if item has been used or altered. Refunds will not include shipping costs. Sales of custom made items are final.

I make all of my items one at a time, so custom work is always an option. Drop me a line and we will discuss what you need.

0 items in your cart